Ståle and Linda Veie-Rosvoll heard squeaking noises in their garden one cold winter of November 2019, so they decided to see what it was. The married couple was surprised to see that an otter had wandered into their backyard.

Ståle and Linda agreed to take the otter into their home when they noticed that he looked so slim and have not had any decent meal in a long while. The couple called the wildlife patrol that same night to ask for assistance, but the authorities also did not know what to do.

Ståle and Linda figured that they were on their own, so they Googled how to care for a wild otter named Svenn. The couple learned that baby otters like Svenn spend a year with their mother to learn hunting and fending for themselves.

Svenn’s relatives were nowhere to be found, but the one who stepped up to be the baby otter’s family was their pugs, Pernille, Smule, and Madde. Ståle and Linda initially planned to keep Svenn until spring, but he ran off until everyone could no longer see him.

Ståle, Linda, and the dogs were heartbroken because they have already gotten attached to Svenn. They went inside their house and hoped for the best.

Fortunately, Svenn went back and stood outside of the Veie-Rosvoll’s door the following morning. Svenn kept squeaking and begging to come back into the house until Ståle opened the door for him.

Pernille became happier when Svenn came back, and the two eventually became inseparable. Smule started acting like a mother to Svenn and always put him in his place whenever the otter misbehaved, while Madde did not really care much about Svenn.

Ståle said that the dogs are like siblings who always fight and make up with each other. Ståle and Linda shared how happy they are that Pernille, Smule, and Madde accepted Svenn as their little brother. 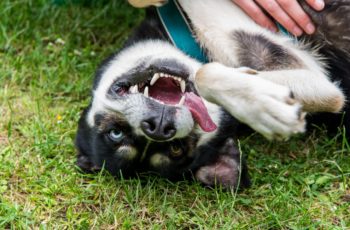 Most rescued animals have been through trauma and will have …